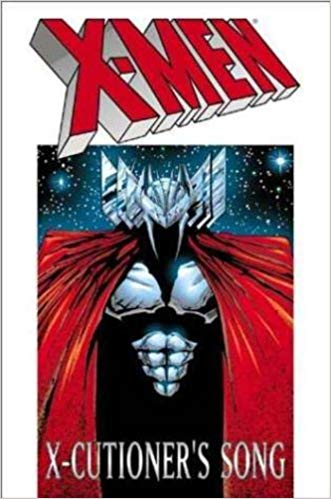 The next collection in my X-Men Reading Order Project is X-Cutioner’s Song. This one was fun, and a little different than the stories I’ve read so far, in that it’s the first collection I already owned from years ago, and leads up to where I originally started reading the X-Men books in the 90’s. It was also the first story I would be reading for the second time, some 25 years later! So it would be interesting to see how it was on my second go-round after so much time had passed.

The edition I read is an older one (ISBN 0-7851-0025-3), which is full color and collects X-Men (series 2) #14-16, Uncanny X-Men #294-296, X-Factor #84-86 and X-Force #16-18.. There have been newer releases since then that are probably better quality and are at very reasonable price points, so you’d probably be better off checking one of those out, as they are pretty easy to find. For now though, I’ll be looking at my old collection, both to save a bit of money, and for the nostalgia (I really like the Stryfe cover art).

First up, I’ll be taking a quick look at the print and binding quality of my collection. The binding and pages are nice, but there are quite a few places where there are missing words and footnotes left out. They also took out the cover art to sort of make everything feel like one big story. I wouldn’t have minded this if they had included a cover gallery in the back. It’s really not a huge deal, but it would have been a really nice touch. It’s for these reasons I’d go ahead and check out a newer edition if you’re going to pick one up.

With that out of the way, let’s move onto what’s really important: the story. When I’d originally started reading the X-Men in the 90’s, I began right after this story. So I’d picked it up years ago to have the story leading up to my original start. Back then I really enjoyed it. Everything about it was super cool and the stakes were high This time? I actually loved it even more than I originally had. The big difference of course being that this time I knew all the stories leading up to this mega event. I’d gotten attached to the characters and was way more invested in them. So, while it was a great story on its own, having read the stories leading up to it made it that much better.

As usual, I won’t get into many story specifics to avoid spoilers for anyone who has yet to read it. I will say that some major things take place that tie in to events all the way back to Inferno, and, more recently End Game (which I talked about here). Characters such as Cyclops, Jean Grey and Cable are among those featured, and villains Stryfe and Mister Sinister (one of my favorite bad guys) are just a couple of the trouble-makers. By the end we’re left with major repercussions for years to come. The art is very 90’s, fun and well done, and the story arc across X-Books is well planned and executed.

So, I enjoyed it even more, years later, and would definitely recommend it!